The Erickson Center for the Arts Marches On; Our Next Big Move!

The mission of the Erickson Center for the Arts is to enrich the mind, body and spirit of the Eastern Upper Peninsula communities we serve through the presentation of artistic and cultural exhibitions and programs. We strive to facilitate experiences that will encourage personal growth beyond our walls and our community.

During the summer of 2002 Curtis residents Richard Erickson and Harlan Maurer met with community members and organizations and concluded there was a need to provide the community with additional educational, cultural, and physical activity opportunities.

For the previous twenty-six years, through the cooperation of property owners Clarence & Velma Walsh, the Curtis community enjoyed the use of their forty-acre parcel of land on the west end of Curtis, overlooking South Manistique Lake, for public events like Fourth of July activities and Art on the Lake.  The Walsh property was identified as being a key in reaching the goal of adding a multi-purpose cultural center.  The property was secured for the perpetual use of the residents of and visitors to Curtis in 2002. The funding for the property was acquired through the generosity of Richard and Nancy Erickson.

As a condition of the sale, the Walsh family requested that nearly half of the land be put in conservancy. That restriction resulted in the creation of nature trails which had the benefit of answering part of the need for more physical activity opportunities and ensured that the land could not be further developed.

What is now known as the Erickson Center for the Arts was first founded as the Curtis Community Arts Council. It was organized as a nonprofit to manage the development of the arts and cultural opportunities and to oversee the property.  In the early years, the Walsh home located on the property, was used for office space, classes, and meetings. The lower level of the home was converted to a wellness center in conjunction with the Helen Newberry Joy Hospital. Additionally, with the guidance of Arts Council, a band shelter/outdoor stage and outdoor ice rink were built in 2004. Volunteers continued to work tirelessly to develop the organization’s structure, revenue streams, programs and events over the next several years.

The current Erickson Center building was opened in 2008, a gift again from Richard and Nancy Erickson.  The 11,000 square foot building accommodates a beautiful large and open multipurpose room, restrooms, storage areas, and a catering kitchen.   Its location takes advantage of the property’s elevated view of South Manistique Lake.  Upon opening, only the upper level of the building was completed. In September 2011, a capital campaign was launched to fund Phase 2 of the Erickson Center project that would create the Arts & Education area located on the lower level of the new building. Finished in 2012, it provides classrooms for art and cultural education, studio space for guest artists to create original art works, an administrative office, and the Waterfront Gallery & Gifts that offers local artists’ work for sale.

For many years the ECA has produced theatrical shows, staged a vaudeville style fundraiser, and hosted live musical performances. In 2016, the Board decided to add a summer musical theatre production to their 2017 summer schedule. They chose a family-oriented show that would include both youth and adults onstage. The first production was Shrek the Musical, that played to sold out audiences for three performances. The following summer they chose the musical version of The Wizard of Oz that was also heavily attended. Both were well received and showcased the talents of many children and adults in our community. The only negative realized from this program expansion was a confirmation that the current multi-purpose space was not ideal for the performing arts, an observation made previously during live concerts and other shows.

·         There is no backstage space for set storage, actor entrances and dressing rooms

In early 2018 it was determined by the Board that it would be in the interest of the Erickson Center to investigate the addition of a dedicated performance space just to the west of the current facility. This would address two important Board goals. A dedicated performing arts space would enable the ECA to improve the quality of the presentation of live performances. It would also allow the Board to realize its long-term goal of making the multi-purpose space in the Center available for more rental opportunities such as weddings, reunions, conferences, and school events. In addition, it will allow for greater community usage and current programs and classes not needing a theater setting will continue to be held in the original space. Realization of these two goals will add economic stimulus for the area and improve the quality of life for residents and tourists.

The Iron Mountain architectural firm of Blomquist Associates in association with builder Gundlach Champion was contacted with the specifications for what the Board envisioned, and an estimate of the cost they felt the community could withstand. The result is a proposal for a 1.65 million dollar, 160 seat performing arts center that provides the basics for a suitable live performance space. One million dollars of the projected goal has already been donated by the Nancy A. and Richard P. Erickson Foundation.  Grant requests have been made and are pending. It is our plan to raise the balance of the funding through individual and corporate donations.

The current budget for the Erickson Center for the Arts is $210,000, most of which is spent in the immediate area for wages, supplies, maintenance, utilities and insurance. We currently employ three people on a part time basis, and the addition of the performance center may necessitate the addition of a full-time person in the near future. In addition to the $1.65 million that will be spent on the construction over the next two years, the overall budget is projected to increase by approximately 10%.  A high percentage of this budgeted amount will be spent in the Upper Peninsula or elsewhere in Michigan.

The average number of people that attend performances and visit the Erickson Center for the Arts is nearly 10,000 annually. Recently the Americans for the Arts conducted a study to determine what kind of economic impact the arts have on communities. Their research revealed that each person that attends an arts event spends an average of $31.47 in the local area in addition to the ticket or admission price. Local attendees spend an average of $23.44 and nonlocals an average of $47.57 resulting in the overall average of $31.47. These expenditures include gas, meals and refreshments, childcare, lodging, and gift purchases/souvenirs. This study strongly indicates that an additional $314,700 will injected into the local economy each year by people attending events at the Erickson Center. Add to this the money that volunteers working on shows and events spend during the rehearsal and planning process as well as the ECA’s yearly budget and the current total economic impact is as high as $533,000 yearly.

It is expected that this impact will grow with the addition of the performing arts center through the addition of high-quality performances in the new venue as well as increased rental of the multipurpose space which will now be available for an increased number of days per year.

Please help us achieve our Next Big Step!

As a 501 (c) (3) organization, your contribution may be tax deductible.  Please consult the changes in the charitable contributions tax regulations for further information. 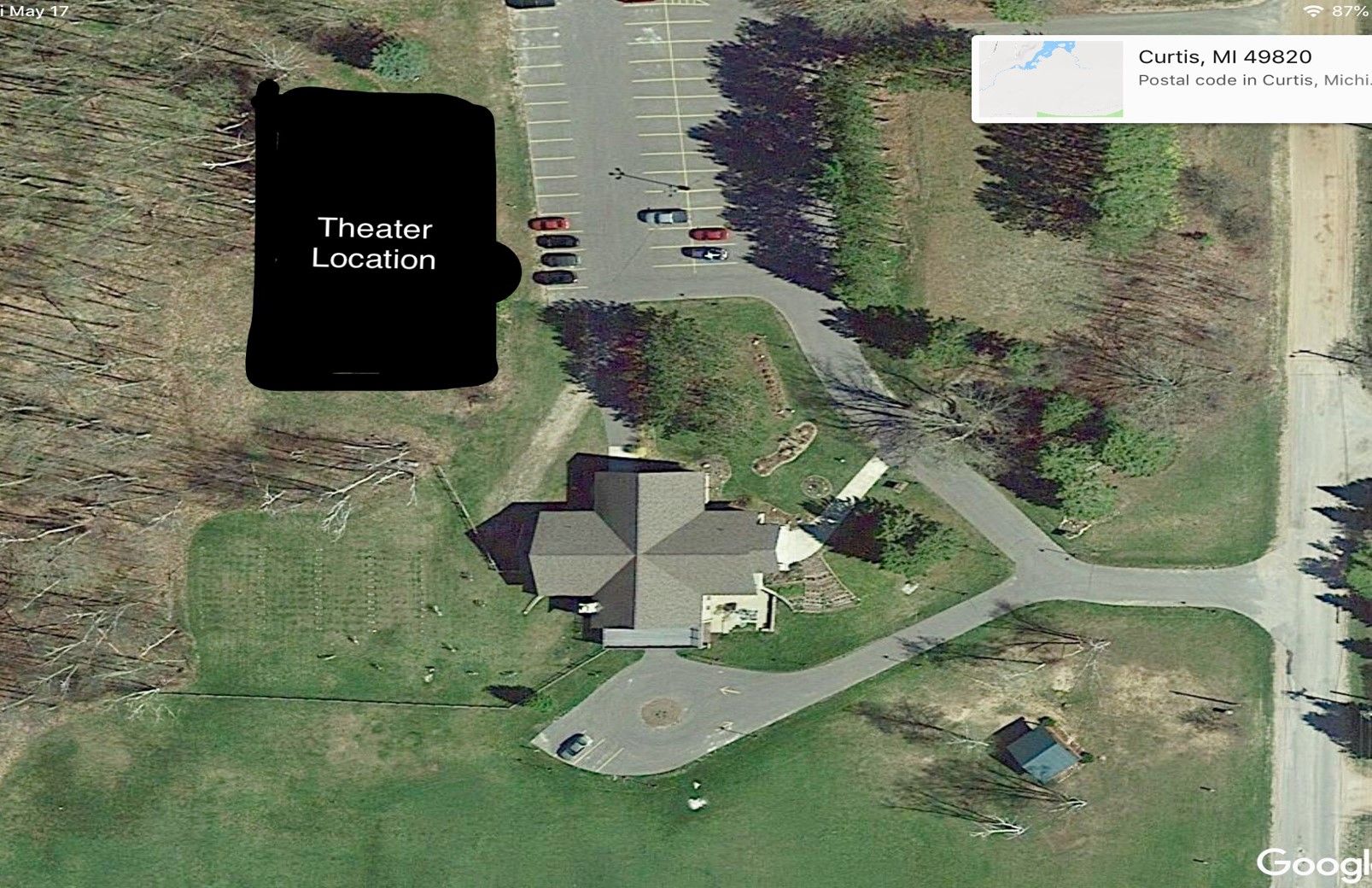 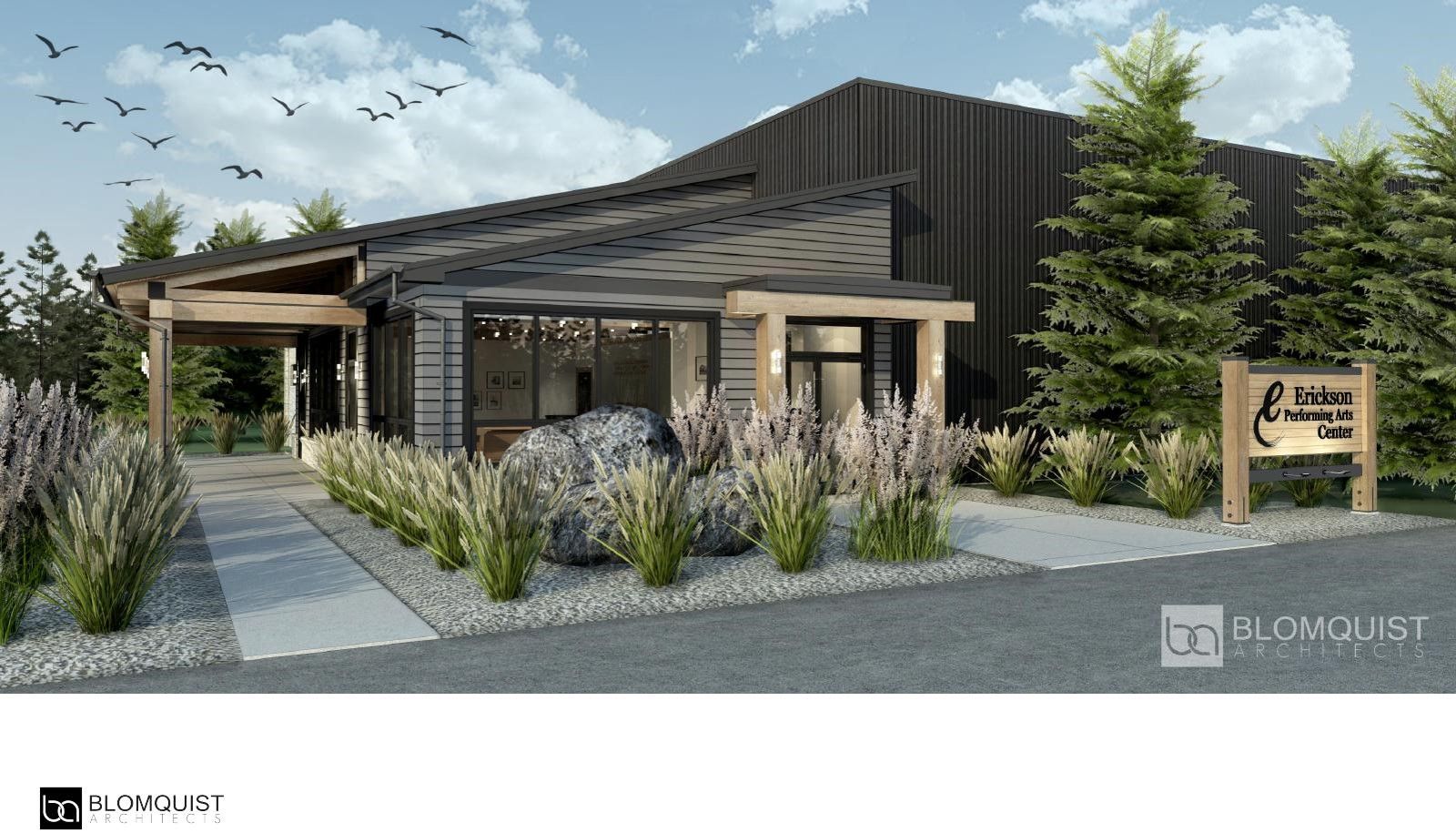 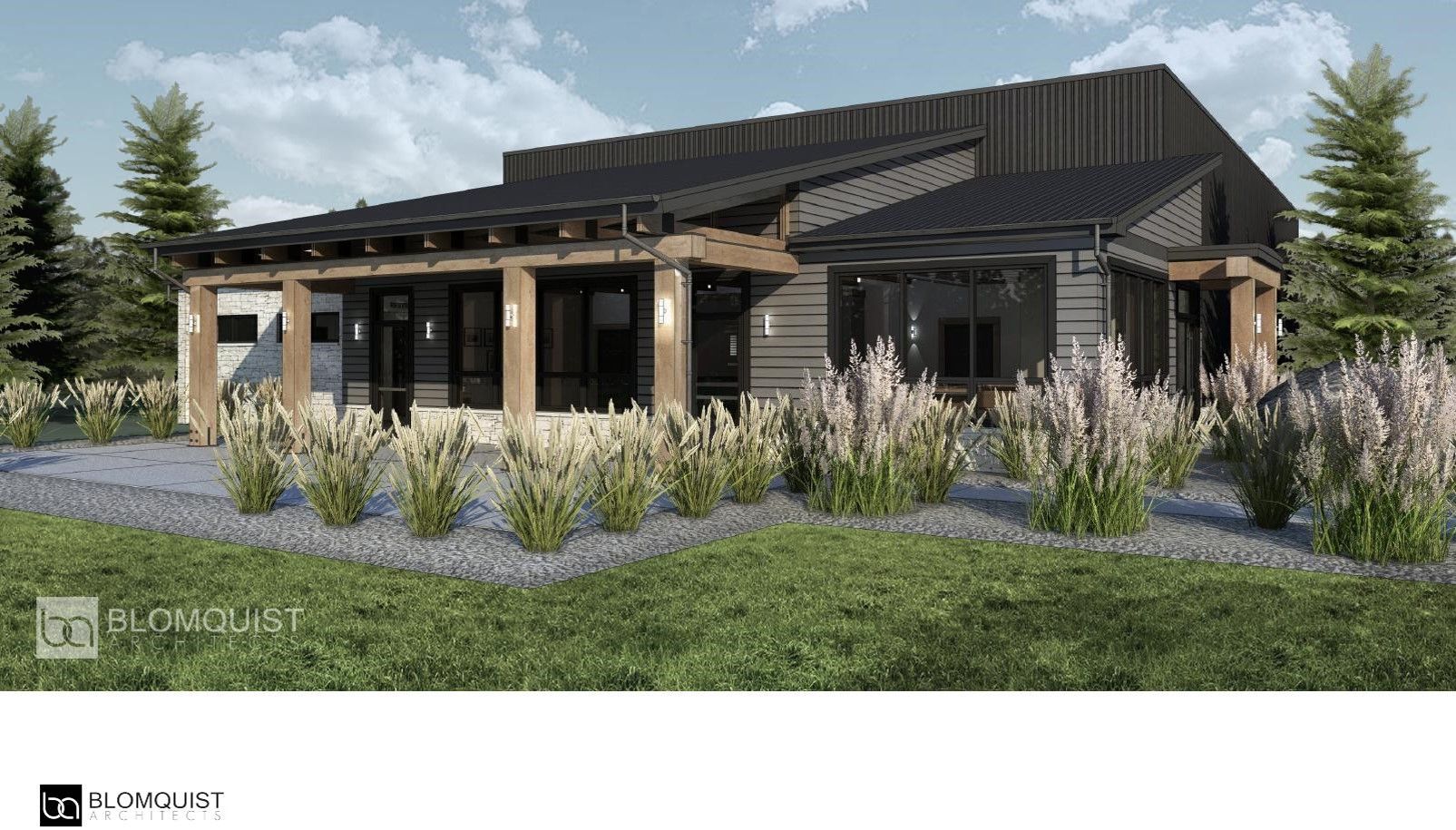 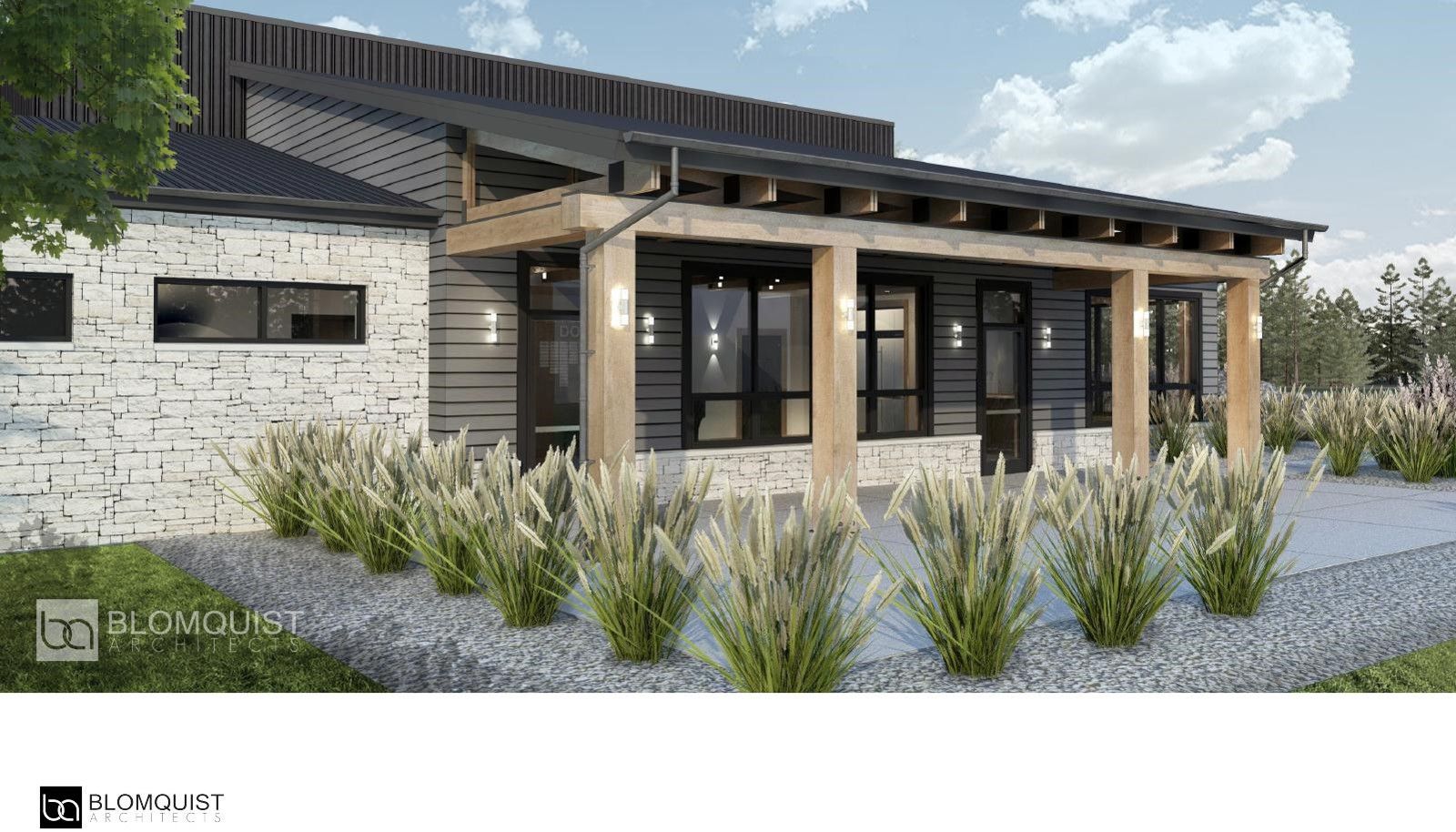 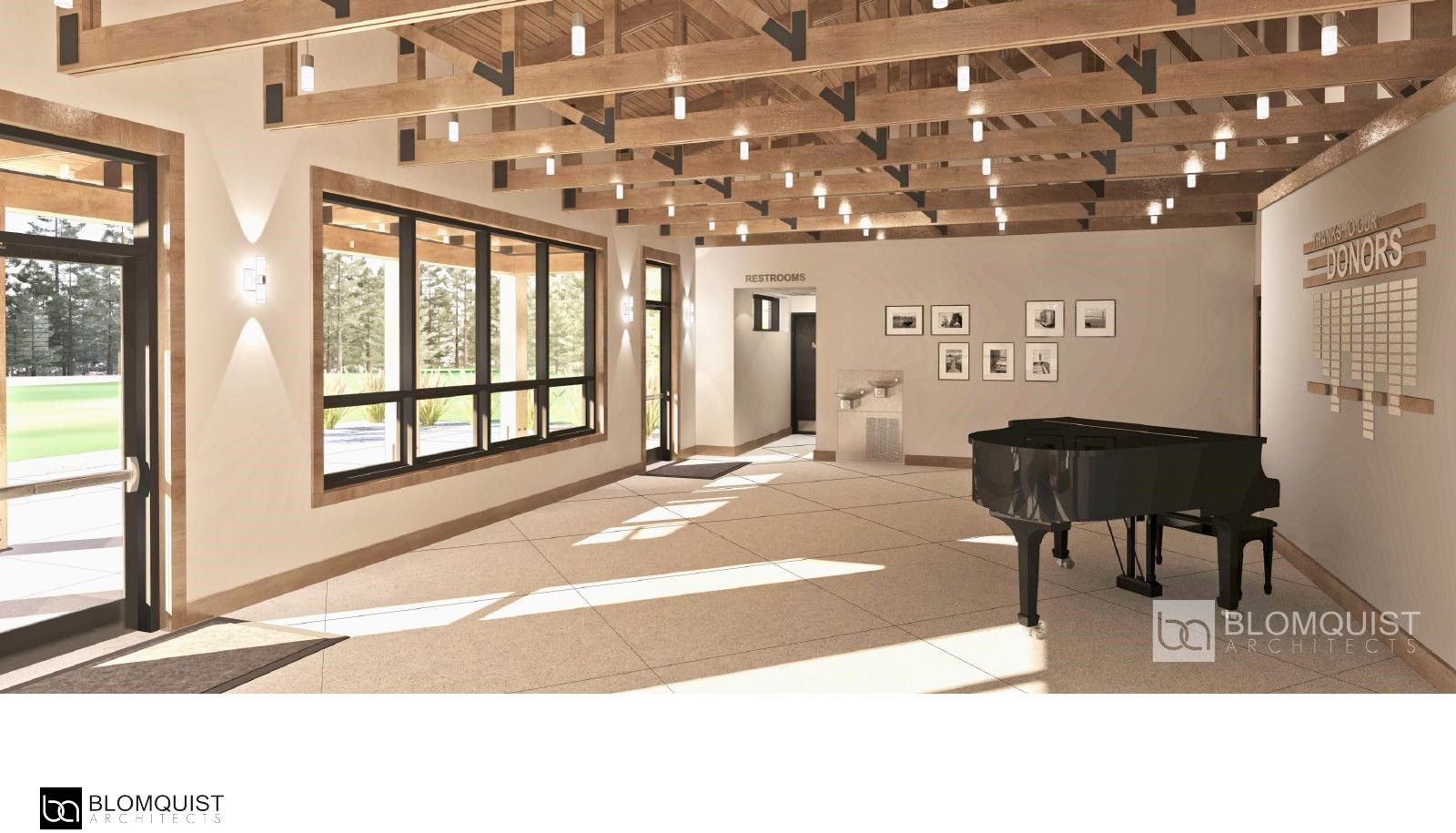 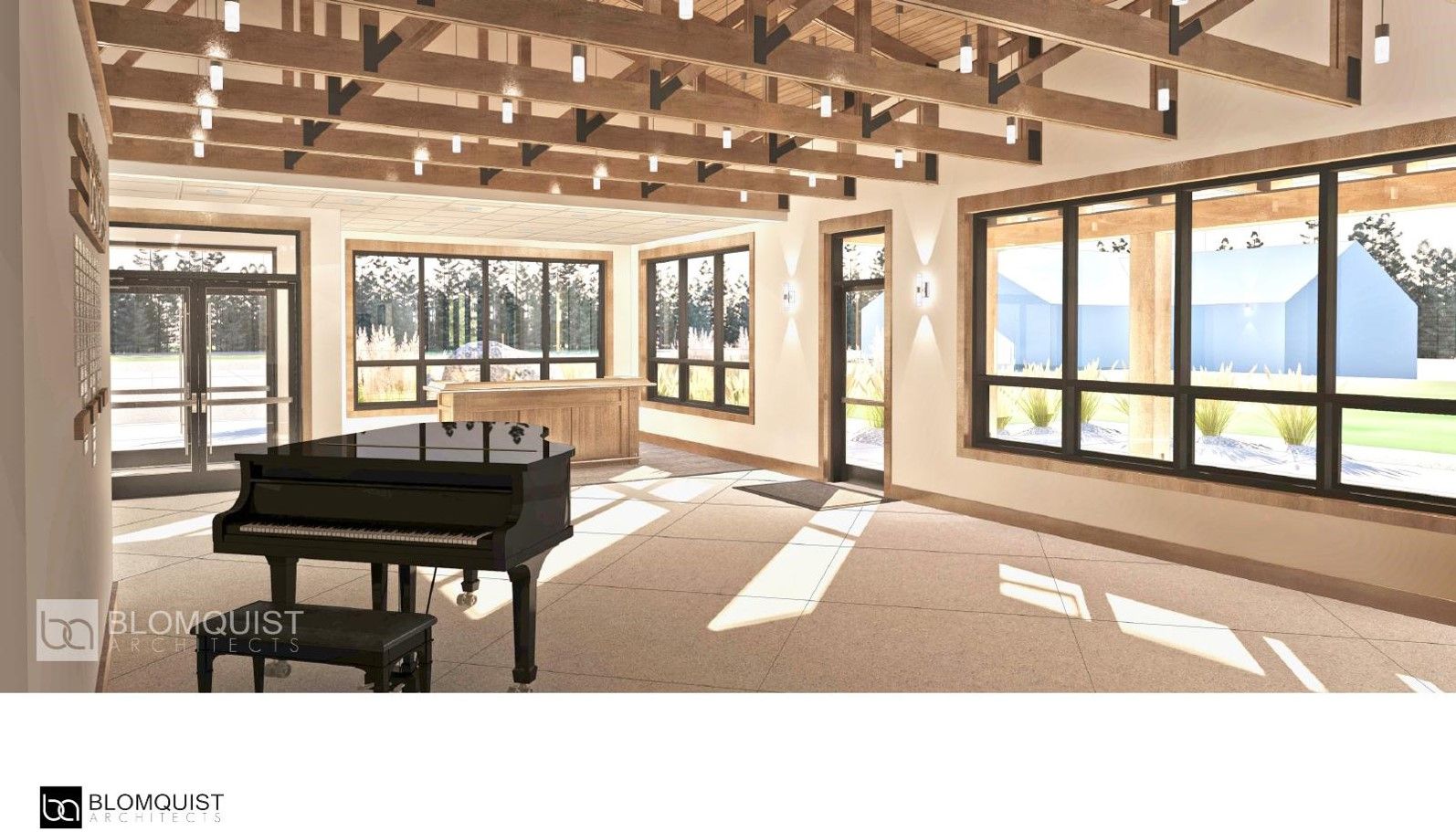 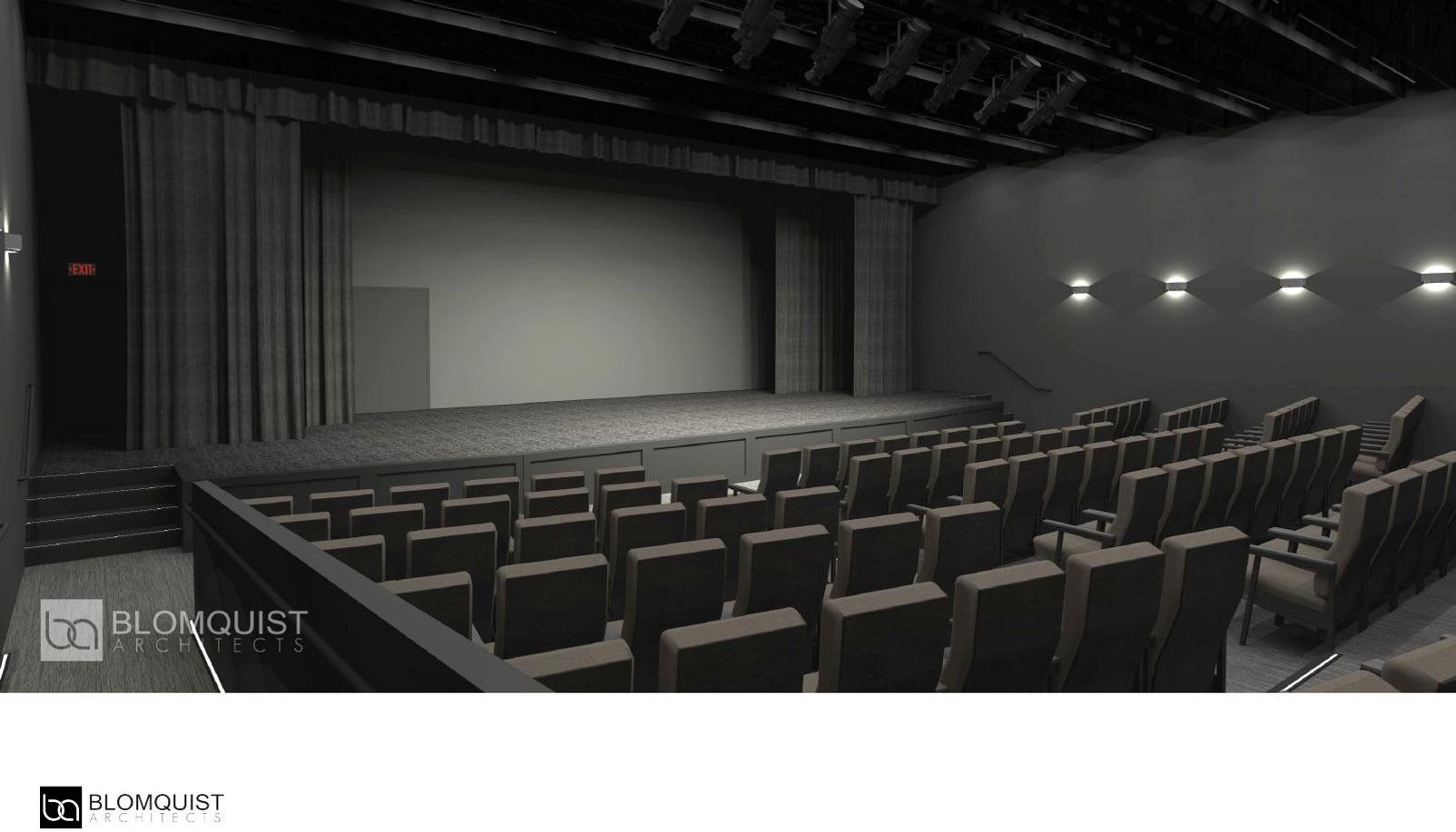 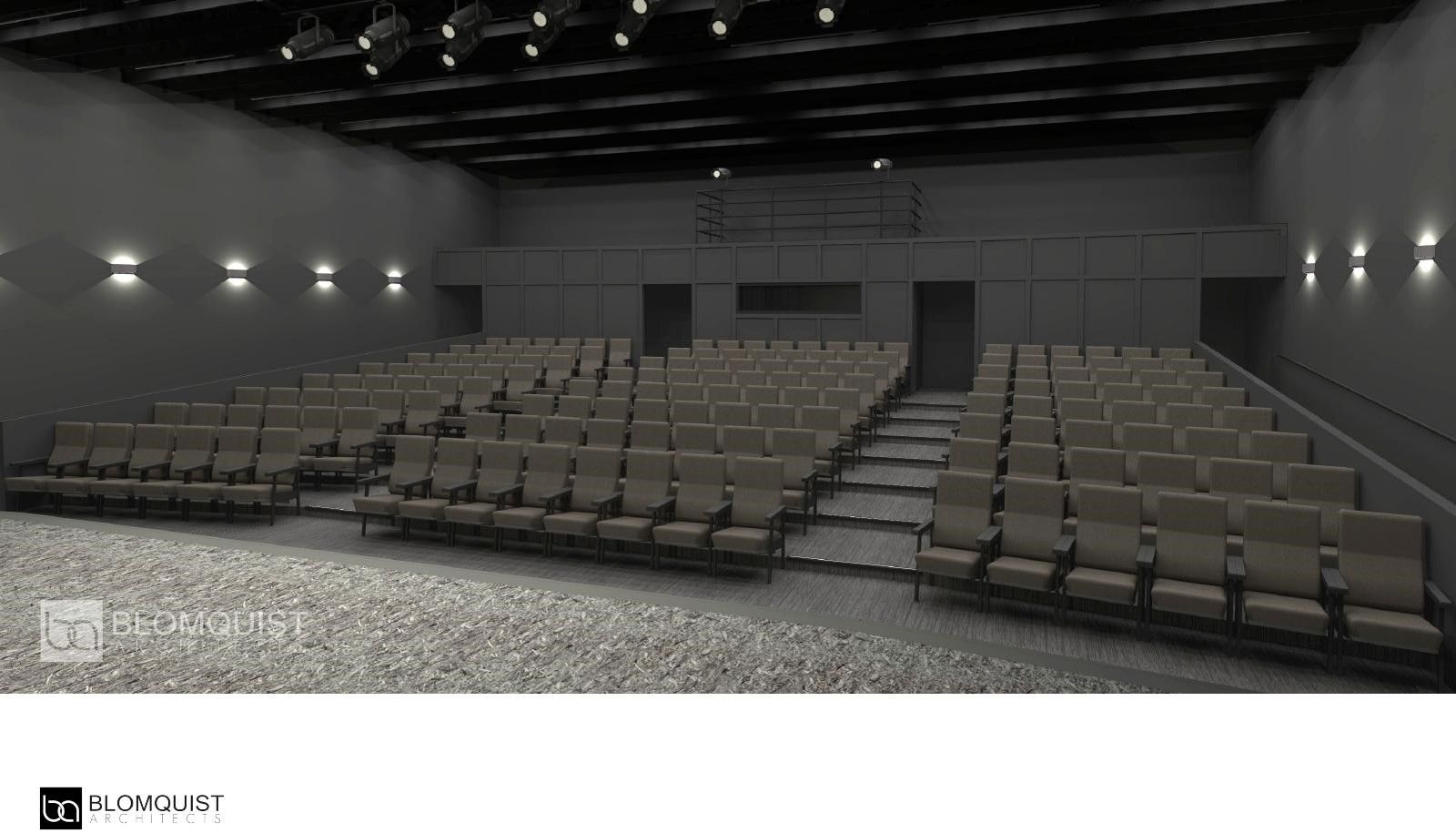 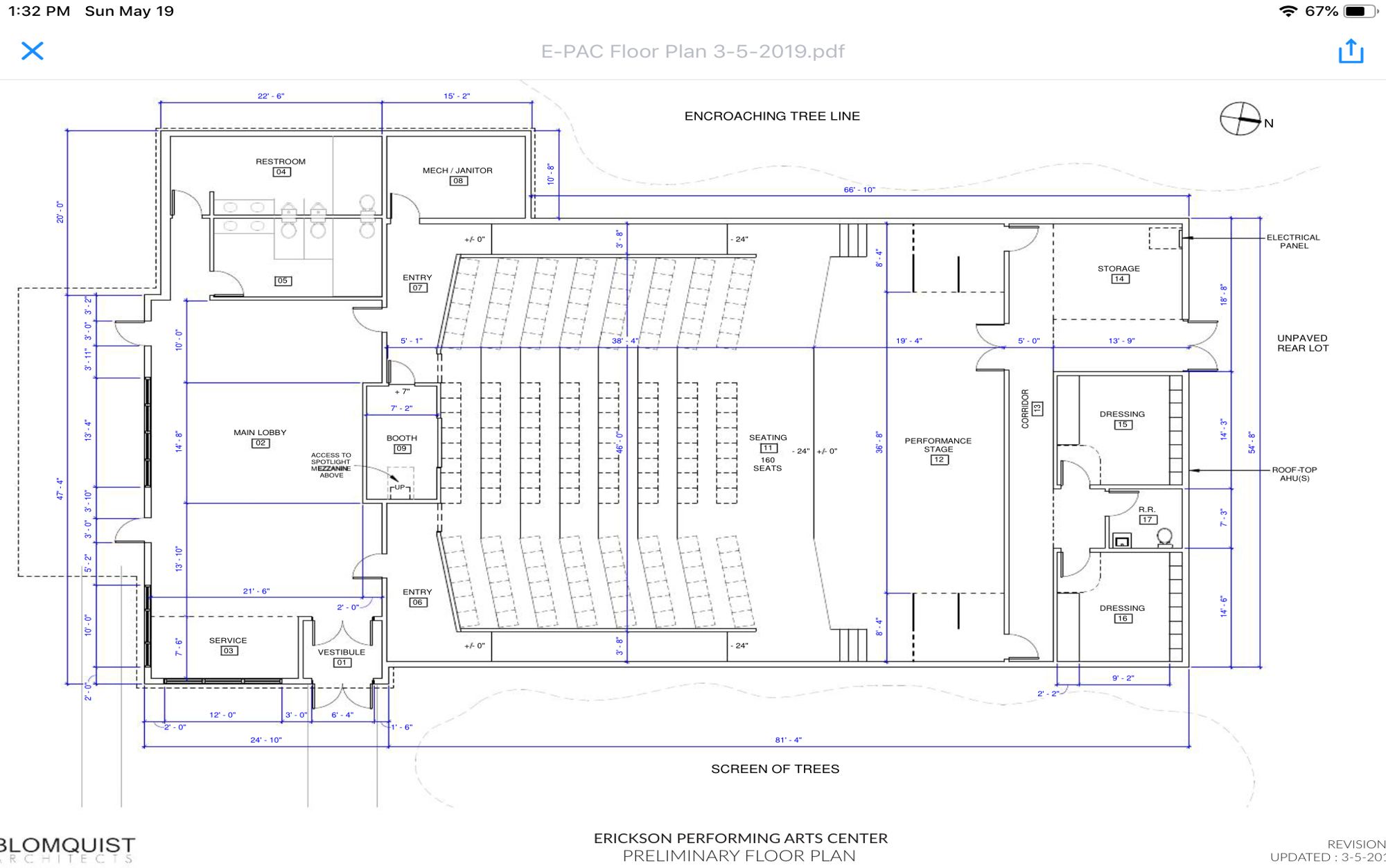 Erickson Center for the Arts, Curtis

The Board of Directors of the Erickson Center has approved the construction of a Performing Arts Theater to be located next to the current Erickson Center Building.  The new facility will house a 160 seat theater with a large permanent stage and a graduated floor for better sight lines to the stage.  In addition, it will provide a welcoming lobby and backstage dressing rooms for the performers, features not present in the current facility.

The current Erickson Center building, generously donated by Richard and Nancy Erickson, was built as a multipurpose building and has served the Center’s needs well but has proven deficient for much of the preforming arts events at the Center.  The success of the Center’s recent musical productions Shrek, The Wizard of Oz and Seussical, were the impetus for the decision that a new facility was needed.   Kelly Chamberlin, Board President stated “it is time to match the quality of the facility to the quality of the directors, musicians and actors.  Our ability to continue to produce high quality performances is not hampered by local talent but by the lack of a true performance space”.

The Center is currently engaged in a capital campaign to raise 1.65 million dollars for the construction of the Performing Arts Theater.  Recently, a major step forward in the campaign was taken when the Center received a grant of one million dollars from the Nancy A. and Richard P. Erickson Foundation, administered by Stuart and Peggy Erickson. Together with donations from the Board, executive committee members and private citizens, nearly eighty percent of our goal has been met.   Board Chair, Tom Linscheid, believes “the addition of this state-of-the art facility will enhance our ability to attract nationally known performers, traveling theater and dance companies, and to produce our own high-quality events thereby adding to the local economy and establishing Curtis as a destination location”.

Anyone interested in learning more about the proposed performing arts center or wishing to contribute to the campaign can contact the ECA at 906-586-9974 for more information.

What will the Performing Arts Center mean for our mission and community?

ECA Board authorized a capitol campaign to raise 1.65 million dollars

We have received a grant from the Nancy A. and Richard P.Erickson Foundation for $1,000,000

We have or will be approaching individuals, corporations, and politicians in our area for support

We Need Your Help!

Please let us know if you have any questions or concerns.

As Chris Gonyea, Bank President, stated “We are thrilled to help the Erickson Center for the Arts move even closer to their financial goal in the construction of the new Performing Arts theater in Curtis.  The State Savings Bank values being part of the Curtis community and we are proud to be able to join our customers and businesses in supporting the arts.  The Erickson Center is truly an asset to the Curtis area and entire eastern Upper Peninsula, while supporting local artists, crafters and performers.”

The Erickson Center is grateful to State Savings Bank and our many individual and business donors who have given generously to bring us near to our fund-raising goal.  We thank the Bank for its support and belief in the vitality of Curtis and the surrounding area.   Kelly Chamberlin, ECA Board President believes “the confidence shown in us by our donors is gratifying and serves to remind us that without the support of our patrons, donors and volunteers, we would not be where we are today.”  Construction of the 160 seat Performing Arts theater with state-of-the -art facilities will allow the ECA to expand and improve the quality of our performances.  Assuming the fund-raising goal is met, construction of the new building is tentatively set to begin in the spring/summer of 2020 with a grand opening in 2021. 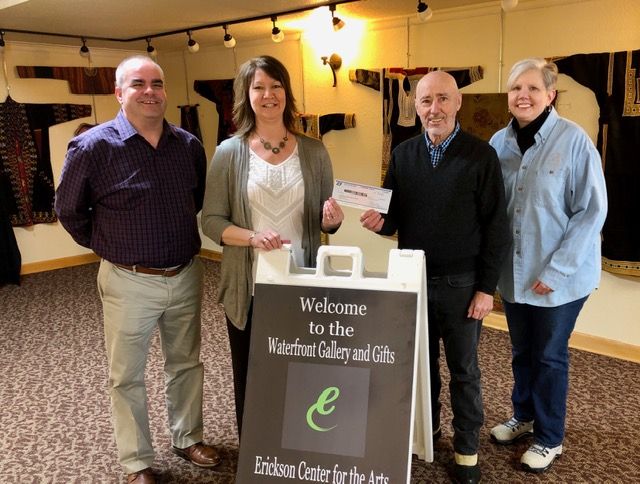